Unwrapping the History of Cadbury Branding 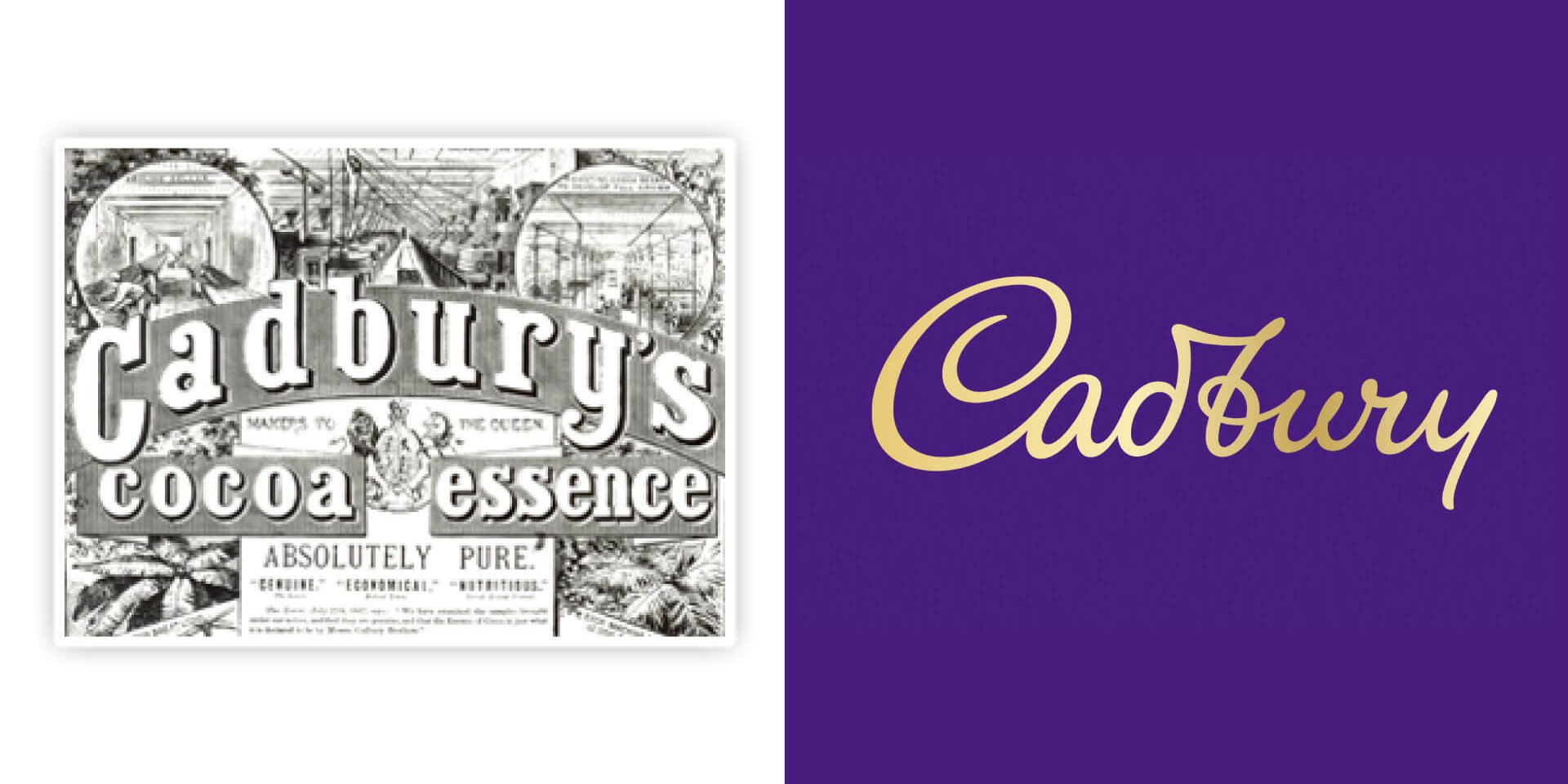 Easter is just around the corner and if you are anything like us, you are looking forward to spending the long weekend relaxing and indulging in fresh hot cross buns and plenty of chocolate.

A quick stroll down the aisle of any Australian supermarket and you are faced with a wall of purple – belonging to the iconic confectionery brand, Cadbury.

So grab a snack, sit back and relax as we step you through the history and evolution of Cadbury’s branding.

How it all began

In 1824 John Cadbury opened a grocery store in Birmingham, England – with a vision to create and sell healthier beverages as an alternative to alcohol. This included handmade cocoa and drinking chocolate, hand-ground by Cadbury himself with mortar and pestle. Their original logo was reflective of the era, a serif typeface that was charming and trustworthy and would look right at home on any local high street.

As the 1800s progressed, Cadbury pioneered chocolate in the UK. Chocolate was exclusively consumed in a beverage until Cadbury created the first solid piece of chocolate, made for biting into.

Another fun fact? The chocolate company’s first overseas order came from Australia in 1881.

The creation of Dairy Milk

Fast forward to the beginning of the 1900s which saw the rise of Cadbury Dairy Milk chocolate, as their sales in solid chocolate skyrocketed. Cadbury merged with J.S. Fry and expanded internationally into Australia. This business move made sense, as Aussies were the company’s first international customers.

The introduction of Diary Milk saw the Cadbury brand transform from how it used to be in the 1800’s. With the 1905 branding featuring a pale lilac background and red type, it is a stark contrast compared to the classic Cadbury purple we are used to today

As time went on, the brand’s identity gradually transformed into what we know today.
Notably, in the early 1900s Cadbury adopted the iconic purple as its primary colour –Pantone 2658 C. In 1995 Cadbury began claiming sole rights to the specific shade of purple – however lost the rights to this in 2013. Currently, Cadbury continues to use the iconic colour using unregistered rights. 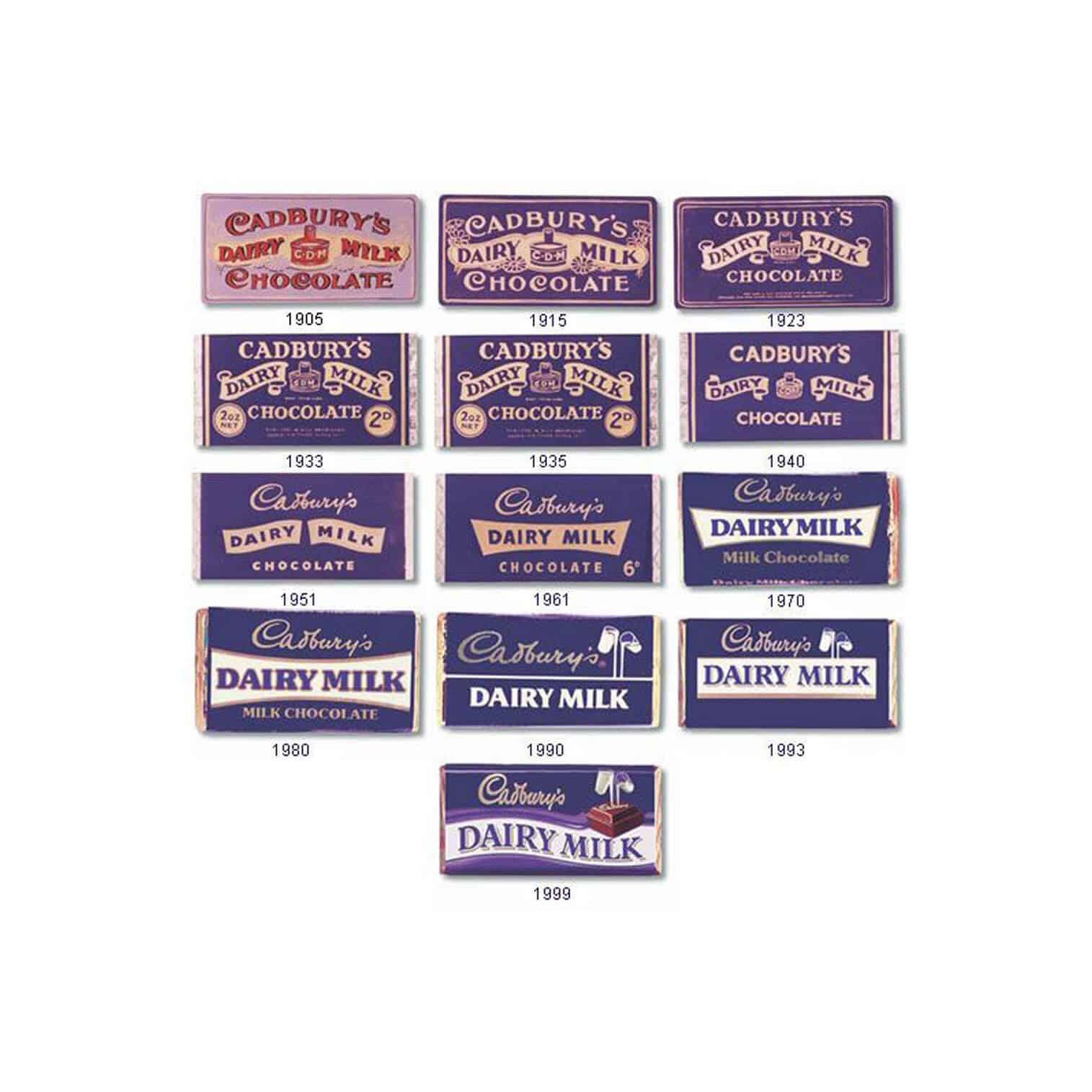 The evolution of Cadbury’s Dairy Milk branding over the 1900s

The first Cadbury script logo appeared on the transport fleet in 1921, not appearing on major branding until the 1950s. The script type is closely tied to the Cadbury family as it was based on William Cadbury’s signature.

Yes, their chocolate is really made with a generous glass and a half of milk

The iconic Glass and a Half symbol was initially created in 1928, reflecting the amount of milk used in Cadbury’s chocolate recipe. The symbol and phrase “there’s a glass and a half in everyone” is now globally recognised, associating the chocolate brand with the friendly connotations of kindness and giving. Think about how many boxes of Favourites you’ve bought along to gatherings with friends and family, or how every Easter, Cadbury easter eggs and bunnies are always a great go-to option.

Have you noticed the blocks of Cadbury Dairy Milk looking a little different the past year when you’re browsing the chocolate aisle?

That’s because Cadbury and the Cadbury Dairy Milk brand underwent a branding update.

A new, more contemporary brand, designed by Bulletproof, first debuted in Australia in April 2020, unveiling in the UK earlier this year. Take a closer look at the most recent Dairy Milk packaging and you will notice 1905 sprinkled throughout the background pattern, a subtle nod to the company’s history. The script logo has undergone some changes too. The logo is now a thinner weight and sits horizontally, as opposed to the angle it was previously on. Squint your eyes and you’ll also notice the classic d and b ligatures have been slightly altered.

This most recent update has introduced a subtle modern look while keeping the traditional and recognisable elements of the brand intact.

Are you looking to evolve and update your company’s branding? From brand identity, strategy, digital marketing, social media and more the Soak Creative team can help.

Get in touch with us today!

Elevate your Social Game with a Facebook Marketing Partner
July 12, 2021